Please ensure Javascript is enabled for purposes of website accessibility

A Pencil and a Dream Can Take You Anywhere

“It began with a question,” relates founder Adam Braun of his meeting with a small boy begging in the streets of India. “I asked what do you want most in the world? He said “A pencil.” I reached into my backpack, handed him my pencil and watched as a wave of possibility washed over him. Over the next 5 years, I backpacked through more than 50 countries, handing out thousands of pens and pencils across 6 continents.”

It soon became clear to Adam that there was a need for a non-profit organization that was led by a staff of locals within each country, which would require village participation in each school and would deeply support, train and track each student to ensure their success. In response to this need, Adam started a for-purpose organization in October 2008 that builds schools, trains teachers and funds scholarships known as Pencils of Promise (POP).

Because operational costs are covered through private donors, 100% of every dollar donated online goes directly into programs to educate children.

“Pencils of Promise is now a global movement of passionate individuals,” says Adam. “Many of which are the most dynamic and impactful leaders we have ever seen. They are committed to supporting a world with greater educational opportunity for all. Thousands have joined us, making contributions through acts both large and small.”

One of those committed to helping Pencils of Promise is our own Waldorf dentist,  Dr. Bradley Olson. “Education is a cause that’s truly important to me,” affirms Dr. Olson. “So I’m excited to join the Pencils of Promise movement that empowers lives around the world by increasing access to quality education for children in the developing world.” 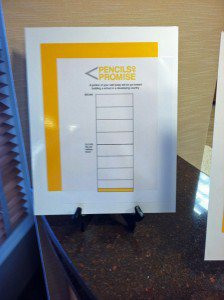 Dr. Olson’s goal is to raise $25,000 for POP. He has pledged to donate $2 for each patient visit, each quarter, until he reaches his goal. On the front desk at his dental office you can read a description of Pencils of Promise along with a comment that a portion of each patient’s visit will be put toward building a school in a developing country. Another chart shows the progress the doctor has made in fulfilling his pledge. You can follow his progress at www.stayclassy.org/bradolson

Being a part of the community, locally and on a global scale, is very important to the team at Bradley J. Olson, DDS, FAACD, FAGD. We invite you to drop by our Waldorf dentist office and learn more about how you can participate in supporting such a great cause or you can donate directly on their website. www.pencilsofpromise.org.

Related posts:
← 4 Reasons to Baby Your Teeth During Pregnancy Why Should I Floss My Teeth Daily? →